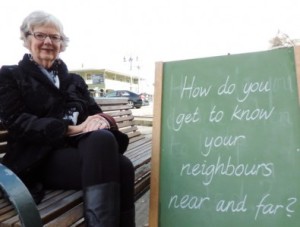 ‘How do you get to know your neighbours near and far?’

THE Kerferd Oration committee has released the third of eight questions being asked of Indigo citizens and communities to stimulate thinking about ethics in the lead-up to this year’s oration by ethicist Simon Longstaff in Beechworth on July 19.

Beechworth Neighbourhood Centre manager Jude Doughty had thought deeply about her answer when the Ovens & Murray Advertiser met with her over the oration’s sandwich board outside Beechworth Post Office on Monday.

“How do you get to know your neighbours near and far?” – that’s the question.

“I’ve been thinking a lot about this,” Ms Doughty said.

“It’s raised a lot of questions for me because I thought: ‘Now, what is a neighbour?’ – and that prompted me to go and have a look at the definitions. There were three.

“There was one around the people who live next door to you, there was a more universal one about being kindly and helpful to your neighbours and then there was one in the Biblical sense of ‘Love thy neighbour’ – which is probably the ‘far’.

“I was thinking about my own experience of neighbours and we have very different relationships with neighbours.

“There’s the ‘neighbour from hell’, and then there are those that you keep a bit of an eye out for but don’t really know them.

“Then there are the neighbours for whom you collect the mail or feed the cat or put out the rubbish, and then there are some neighbours that you become really good friends with, and I think that depends on the stage of life.

“If you were in a street with a whole lot of young children the families all get together for barbecues and the kids playing.

“I live next door to some older people (in Beechworth). So that was the other thing that I thought about because I also lived in a high rise apartment in the heart of Melbourne for many years.

“The idea of ‘neighbour’ in that environment is different to here.

“The value of knowing your neighbours does ensure safety and comfort – if something goes wrong you’ll look out, and having a string sense of neighbourliness does result in a more cohesive community, a more respectful community.

“(Social commentator and author) Hugh McKay says a good life is not where you live but how you live. He talks about the need to engage, volunteer, and he talks about ‘joining in and joining up’, which, as manager of the BNC, has prompted me really to think about the role of a neighbourhood centre in a changing world and changing community.

“But it is about being connected to community and making sure that if something does go wrong that we are there, that we are able to make our contribution as the BNC, bringing people together with a shared and common interest.

“Neighbours sit somewhere between family and close friends and social media, but neighbours are real.”

Ms Doughty said the Kerferd question had prompted her to plan for a Beechworth ‘Neighbours’ Day’ – an event to which people across the community bring their neighbours.

The oration is named in recognition of the community service of George Kerferd, a nineteenth century Beechworth municipal chairman and later a solicitor and colonial government minister who became Victorian premier.

The oration – now in its 13th year – is a free community event and will be held at George Kerferd Hotel from 10.15am.

This post is reprinted from the ‘Ovens and Murray Advertiser’, which is supporting the oration by publishing each question of the week.